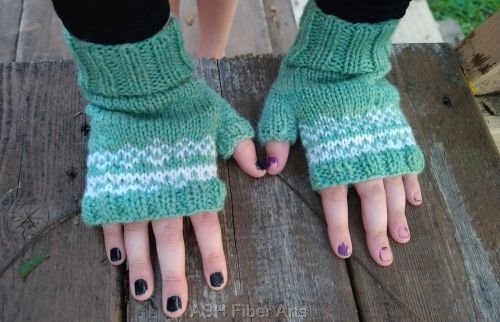 It’s certainly been a while since I’ve released a new design. However, I have a couple that are in the works to be released next month:

These fingerless mitts include a flirty stranded knit pattern and are a quick knit. My 9-year-old daughter modeled this child size version – complete with her “lovely” painted nails. 🙂

Also in test is a crochet design. It’s an afghan I created several years ago but never got around to publishing. I originally made this as a square lapghan (shown here). Soon after, I tore it apart, added more blocks and turned it into a wider and longer version for my daughter’s bedroom.

My excitement is growing about these soon-to-be-released patterns! But also because I am making progress on many more designs that were languishing these past months!

My designing mojo has returned! One reason: submitted a design call for a magazine and came up with the swatch as my concept. I am itching to make it happen, whether or not it’s accepted by the magazine. I ordered the yarn last week and hope to begin this weekend!

Are you a knitter or crocheter that enjoys testing new patterns before they are released? Sign up for Design Testing updates. And as always, sign up for my newsletter for semi-regular news, discounts and more!

I love to design quick, colorful knit and crochet patterns for the adventurous crafter. My specialties are hats and shawls. Whimsical stitch markers are an obsession!

Brunch with the Dye Monkey

Hi there! I'm Carmen: a fiber addict; a lover of yarn and all things related. My passion is to design beautiful knit and crochet designs that are bursting with color, texture and offer an adventure for your crafting pleasure!

Get all latest content delivered to your email a few times a month.

I am still working on setting up the store, but feel free to look around for now! Dismiss